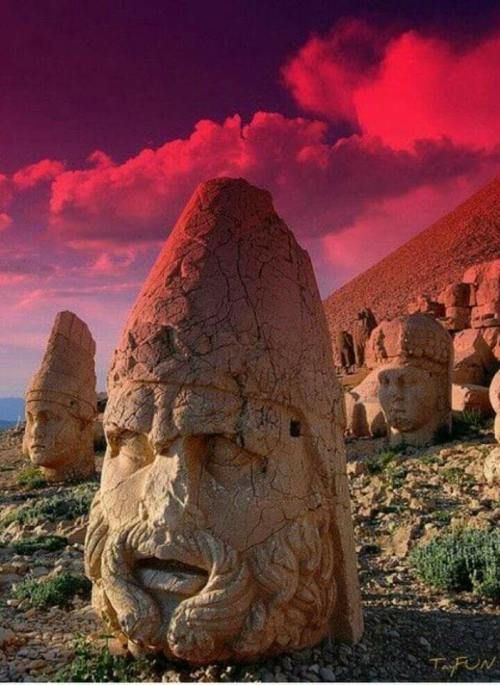 On this 5 day tour you will discover southeast Anatolia. Located around the Euphrates and Tigris rivers, this region has been inhabited for thousands of years. This is Mesopotamia where our history began.

Early morning  flight from Antalya to Adana. After  being met at the airport we drive to Halfeti for an unforgettable boat trip on the lake . Halfeti is one of the most unusual sites in Turkey because the old town is mostly submerged into the water after a dam construction. En route we will stop at the breeding station of the  Bald Ibis birds (Geronticus ermita), which are in danger of extinction. We then head towards the city of Gaziantep for a visit to  Zeugma Mosaic Museum , Gaziantep Castle  and coppersmith bazaar.

Dinner and overnight in Gaziantep

We head towards Adıyaman. After being settled in our hotel change busses and continue to  Nemrut Mountain National Park. The summit of Mount Nemrut is home to one of Turkey’s most iconic sights. The fascinating and eerie funerary mound of King Antiochus I of the Kingdom of Commagene sits atop this 2,150-meter peak. Under the 50-meter-high, man-made burial mound, Antiochus’ tomb is said to be concealed (though despite extensive archaeological work here, his tomb has never been found), but on top of the mound is one of eastern Turkey’s prime tourist attractions.The spectacular terraces here are littered with the toppled remnants of giant stone statues that were once majestically lined up to celebrate Antiochus’ own glory and the glory of the gods. After visiting Karakuş burial mound, Cendere Roman bridge and Mount Nemrut at sunset we return to Adiyaman for dinner and night.

Dinner and overnight in Adıyaman

Following breakfast  we drive to  Şanlıurfa and  will visit a number of holy places. The city of the prophets has much to offer. We  will visit the cave where Abraham was born, the place where he was thrown into the fire, Balıklı göl, Halil-ül Rahman gölü, Ayn-El Zeliha gölü, Mevlid-İ Halil mosque, Rizvaniye mosque, Covered Bazaar, Kilim Bazaar, Spice Bazaar , the hardware bazaar, the brass bazaar and the gümrük han. We then  continue  to Göbeklitepe (UNESCO), the place where the history of man is being rewritten. This historic site is the oldest discovered temple in the world and  built between 9,000 and 10,500 BC. İt is more than 6,000 years older than Stonehenge in England.

Dinner and overnight in Şanlı Urfa.

Optional: Join us on a traditional Urfa ‘sıra geces ‘ night including dinner, music and dancing.

Following breakfast we head for Harran, one of Turkey’s most exotic corners. Among the imposing ruins of the old city live an Arabic speaking tribal population in beehive-shaped houses built of unbaked mud. The women  dress in fantastic colours . The men are imposing in their flowing desert robes. Their lifestyle has changed little since the times of the patriarch Abraham, who lived in Harran with his father Terah, according to an early chapter of the Jewish bible and was here notified of the promised land that awaited his people. Harran’s Temple of Sin was one of the holiest sactuaries of the ancient Near East . It was already old  when Shalmanesser III of Assyria  renovated it in the 9th century BC… After visiting the main remains of Harran continue to Mardin for  a visit to the  Kasimiye Medresse , the Ulu mosque the church of Mary and a city walk to the colourful bazaar.

Dinner and overnight in Mardin.

Day 5: Mardin-Midyat  Mor Gabriel monastry- Diyarbakır
From Mardin we drive to Midyat. The stone houses of Midyat are built with the processing of limestone, which is obtained around Mardin . The soft limestone is very suitable for shaping. Stone masters have used this very well and built stone houses suitable for climatic conditions in the past. Midyat Houses, which are maintained to the present day, preserve the natural texture and are in a very important place in terms of cultural tourism. After visiting some of the most beautiful examples, and  Mor Gabriel, the oldest Christian monastery with a working community we continue to Diyarbakır past  Hasankeyf that was submerged under water in 2020 due to the construction of the Ilıca dam. Upon arrival in Diyarbakır, visit to the important Ulu Mosque, which used to be a church, and the black basalt  walls of Diyarbakır (UNESCO). After some free time in Diyarbakır transfer to the airport. Onward travel.

*** We are happy to help you with car hire, accommodation and itinerary  for  your Self Drive holiday in this region***

Diyarbakır and Mardin, a closer look

Tour of North-eastern Anatolia and Georgia

Berries in the Macahel. Guided walks.